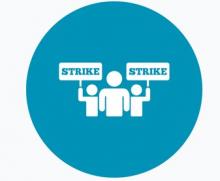 In July 2015, the government published the Trade Union Bill 2015-2016. The Bill made a number of proposals, including:

Further details are available in the explanatory memorandum to the Bill: http://www.publications.parliament.uk/pa/bills/cbill/2015-2016/0058/en/16058en01.pdf

Various amendments were made in the course of the Bill's progress. For example, the government conceded that check off (the option of paying for union membership direct through salaries) would remain where there is an agreement with an employer to provide check off but subject to the union bearing the costs.

In April 2016 the House of Lords voted in favour of certain amendments, including:

The Trade Union Act 2016 will not come into force immediately as regulations will be needed to implement some of the provisions. The key changes under the Act are :

There has been no further announcement with regard to the mooted repeal of the ban on the hiring of agency staff to provide cover for striking employees (see Consultations below) .

It is expected that there will be phased implementation of the Act starting from this year. Some changes (such as check off will be delayed until 2017).

Consultations to Accompany the Bill

To accompany the Trade Union Bill 2015/16, the government  published a consultation paper on tackling intimidation of non-striking workers, a consultation on hiring agency staff during strike action: reforming regulation and on what occupations should be included in the 40% important public services ballot threshold.

The government published its response to this consultation in November 2015.The government stated that it would improve and update the code of practice on picketing to set out the rights and responsibilities of parties involved or affected by industrial disputes. This includes the use of social media and protests. The Trade Union Bill required unions to issue a letter of authorisation to the picket supervisor and the response indicated that the government would table an amendment to the bill to clarify who is entitled to ask for details about this letter. This amendment would clarify that the union’s letter approves the picketing, not the picket supervisor. See now section 10 of the Act

Hiring agency staff during a strike

From July to September 2015 there was  a consultation seeking views on the impact of removing Regulation 7 of the Conduct of Employment Agencies and Employment Businesses Regulations 2003 which prohibits employment businesses from providing agency workers to:

The government wants to remove this regulation to allow employers facing industrial action to hire temporary agency workers from employment businesses to perform some of the functions not being carried out due to the industrial action.

The outcome of the consultation is still pending.

In January 2016, the government published the following impact assessments on key aspects of the Bill including on union subscription wage deductions; reporting trade union facility time in the public sector and effect on business, public sector and individuals of measures in the Bill.